I live in Malmö, which is 30 kilometers from the Danish capital Copenhagen. It takes about 20 minutes to travel over the Sound to with train. Oddly enough, I haven't been to Copenhagen more than about 10 times.


I know what you're thinking. It's a DISGRACE. Or maybe you weren't thinking it, but I was. I've been missing out on all the fun stuff going on in Copenhagen fandom. But to my defence, I wasn't aware of fandom at all before 2011.

The weekend 30-31 th of May, the Danish fandom had their annual sf-convention. And this year - I went!

First, we had a friday warm up pub meeting at Café Asta (which is at the hotel Fy og Bi) were I met some of the danish fans, the Guests of Honour and my swedish friends Johan Anglemark, Pebbles Ambrose Karlsson, Gunnar, Tommy and Michael. We sat in a lovely patio outside in the sun, which unfortunately wasn't so warm. We moved inside, and had a lovely evening. I talked to Niels Dahlgaard and Jesper Rugård whom I've met before at Kontrast and/or Loncon 2014. I met some new cool people; Claes, Bente, Jeppe, Tue, and Andreas. I talked to Ian Watson, brittish sf-writer and one of the Guest of Honour this year, whom I soon discovered was really funny (and wasn't gonna forget that the danes invaded his country!).

I went home to Malmö very late that night, and missed the first panel of saturday due to tiredness. But it was fun so it was worth it!

The Fantasticon program had three tracks on saturday and two on sunday, and were a fun mixture of interviews, panel discussions, presentations and movies. Guests of Honour (GoH) were the aforementioned brittish writer Ian Watson and also the american (Sorry, US:ian) writer Pat Cadigan, two funny and warm hearted persons with many interesting things to say. Ian was accompanied by his wife Cristina Macia, who's translated "A song of Ice and Fire" from english to spanish.

I went to four panels on saturday.

First, I listened to Ola Wikander, a swedish writer, translator and theology doctor, whom was interviewed by Jesper Rugård. I know Ola from many swedish sf-conferences and from Skåne-events, and have listened to him many times before. One thing I like about him is his unconventional ideas and sparkling enthusiasm. He has indirectly helped me dare to try different styles of writing without map or world creation.

After that, I listened to Niels Dahlgaards GoH-Interveiw with Ian Watson and listened to him talk about his books, which I am sorry to say I have never read (but will!). He told us the story about how he got to work with Stanley Kubrick on "A.I. Artificial Intelligence" (I loved the movie, Ian!) and fascinated us with some inside information about his experiences from that (sorry, not telling).

After that I listened to Cristina Macia, spanish translator of "A Song of Ice and Fire", who was on a panel with the danish translators Poul Bratbjer Hansen and Anders Michelsen. It was a fun discussion about how to translate the strange family names, how much Cristina loves to write war scenes (or not) "Did you know there's no word for coat of arms in spanish!" and I learned that the danes and norwegians and swedes actually compare notes from time to time. Almost cheating, don't you think? ;)

The last panel of saturday was about expatriate writers. Since neither Watson, Cadigan or Lucas Bale or Niahm Brown live and write in the country were they're from, they talked about their experiences of being expatriate writers. It was a really interesting panel for me, since I'm almost an expatriate myself. Northern and southern Sweden are like two different countries language, mentality wise and landscape wise. Norrbotten has vast ancient forest, lakes, high mountains, silence, midnight sun, moss and lichen, mooses, bears and reindeers. Skåne's more vibrant, crowded, flowery, filled with yellow rapsmarks, purple and white cherry trees, red poppies, wild boars and venison. (This is some great material for epic fantasy books.) I would love to write something where I could incorporate my experience about changing scenery and different worlds in my own works.

I asked the panel members about it and if they incorporate that in their books. Lucas Bale quickly explained that he's using his experience as being in a foreing and strange country very much since his books are about being isolated (and made a joke about needing some therapy now, sorry for that Lucas!). Pat thought the question was interesting since she's experienced something similar moving from New York to Massachusetts, and feel more at home now in the UK than she ever did in Massachusetts, London being more like the New England millieu and mind set.

On saturday evening, we went to Fy og Bi Hotel and Restaurant again for the conference dinner. It really is a really lovely place, with an orange pattio that had almost a hispanic feel to it. Unfortunately, we were about 50 persons in about 40 square meters, and I got really tired of the noise so I went home early after dinner. 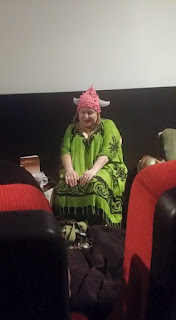 On sunday, I went to four panels. First I listened to Pat Cadigan being interviewed by Lars Ahn Pedersen, where she openheartedly spoke about her illness and how she got started as a writer, while working full time as a hallmark card writer with a young baby at home. I'm sad to say I've never read Pats books, but now that I've listened to her talk about them, I have to read them. She got a Hugo in 2013 for "The Girl-Thing Who Went Out for Sushi" a book set in space about people turning into beings more adapted for space. The book has allusions to today's trans struggling with being accepted and the whole concept sounds really interesting. Also, she was a Heinlein fangirl, and I can really relate to that!


Then I heard Pebbels and Thorbjorn Haugaard Eriksen talk about mental illness and using this experience in writing. Pebbles said that her experience of mental illness included falling down the social ladder. At first she was a successful career woman, and then as she fell ill people started distancing from her and stigmatization followed. Now she wants to write a story about how people are more than they seem, more than a diagnosis, and how you shouldn't catagorize people. It was touching and personal, and I felt a sense of learning something important. In my work as an personal administrator of sick benefits I often help people who suffer from mental illness and I always want to learn more about how it is to live with these different illnesses. I know there's a stigma around these people and I want to help raise awareness of what these guys go through and have to deal with, and how to best help them.

The third panel that day was "Writing in other peoples universes" were Ian Watson and Pat Cadigan spoke about writing Warhammer 40K, Wildcards, novelizations, being in anthologies  and being a part of someone elses fantasy world. Ian said: "I had a 10 year old come up to me and say 'I loved the scene with the dude who got his head torn of. I almost vomited.'" Aye, there's something to be proud of, Ian!

I have read only one Warhammer book and that was "Horus Rising" by Dan Abnett, but the way Watson described his contribution to the series, I really want to read his books. They are "Inquisitor", "Harlequin", "Chaos child" and "Space Marine".

Pat talked about writing the "Making of  Lost in Space" and working with film studios. Not the easiest job in the world. She also mentioned working on Wild cards, where she created some amazing characters whom got the attention of Roger Zelazny among others, who have reused her characters in novellas of his own. Wild Cards is something I wasn't aware of at all but seems to be a science fiction and superhero anthology series in a shared universe. (Now I want to read these too! My list is getting to long...)

The panels were really good, the panelist well informed and funny and the people I met were really nice.

If you have the time and opportunity I can really recommend visiting Copenhagenfandom on one of their pub nights, they are a cool and nice group whom I hope to meet again soon.  And if you're a member of danish fandom, and want to know more about Malmöfandom, I suggest you read our new blog Malmöfandom (which is in english, for your convenience) or maybe you can join our group Malmöfandom on Facebook. Or follow us on Twitter. :)