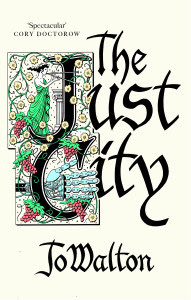 I just read Jo Walton's The Just City, about a group of Platonists whom come together and create a the city Platon imagined as "the just city". They become the masters of the city, and over time they collect young children of ten years of age and begin to educate them in the ways of Platon. With time, they chose which children to be philosophers, and give them golden pins. There is many other different metal pins with different meanings, and it's suppose to represent the soul of the wearer. The iron pin is given to the workers, and the silver pins to others. Everyone is given different chores, and as they reach adulthood they are paired with another of the same caste/class, and they become married for a day. Any children of the marriage are given up to the city, to be cared for as a group by the people of the city, because families are viewed as injust. Sexual relations outside the marriage is considered injust too, as one should love all citizens equally.

It's a mindboggling philosophical experiment, giving modern context to the ancient philosophers ideas. Would Platons Just City be just? Would the humans in the city strive for excellence?

At the same time it has a strong feminist approach, showing the ways women have been treated through time, analyzing what it means to be woman in a world ruled by men and then giving them agency to be their best selves. It does not shy away from womens hardship. It shows rape,  psychological scarring, post partum depression, as well as women failing, women succeeding, women feeling lust or envy. It does all these things, and more, and still I get the feeling the author's not trying to write on our noses, but just has this curiosity and thirst for discussion.

Walton has created this unique setting where gods and robots, time travel and mystical divine intervention coexists,  The main characters are the gods Apollo and Athena, one reborn as a human and one disguised as one, and the women Maia and Simmea, of different times but with equal interest in philosophy, and the Platonistic world. We also get to meet Sokrates.  And robots.

I haven't read anything like this, and I'm not sure I ever will. It's wonderful and great. Read it!
Posted by Fia at 16:25