The Brown Girl in the Ring

Nalo Hopkinson was a name I wasn't at all familiar with before Helsinki announced her name as a Guest of Honour for Worldcon 75 in 2017. I got interested and suggested to my book circle that we read a book by her. And so we did. 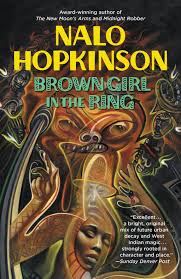 The Brown girl in the ring is a book about Ti-Jeanne, who lives with her grandmother Gros-Jeanne, in the inner city of Toronto called the Burn. Years of riots have driven the police and businesses out of the the city center, leading to an economic collapse which turned the center to a slum area with poverty, gangs and homeless people. The suburbs have barricated themselves against the slum areas, and every year the elected government officials makes empty promises about cleaning up the streets, but so far nothing has happened.

Ti-Jeanne and Gros-Jeanne make their way in the Burn by helping the sick with special creole remedies. Ti-Jeanne's gifted with the ability to see how people are going to die, but recently other visions come to her as well, freaking her out. She's recently had a baby and has left her drug addicted boyfriend Tony to make a better life for her and the kid, but Tony comes back begging for her help to leave the Burn. Soon Ti-Jeanne has to make use of her extra ordinary abilities to fend for her family in order to survive.

This is a short novel, and a fast read. I loved it very much indeed. It's fascinating to read about the carribian culture and mystics, which I haven't read much about earlier. It's also a book about dysfunctional families, talking about real issues of young parents, abusive spouses, disillusionment of motherhood. It also talks a bit about the life of marginalized people, giving a voice to the people living outside of the social net, in poverty, abandoned by the government. It has some very dark passages, and some graphic violence (trigger warning: torture) that I felt was a bit too much.

It's a near future dystopian tale, but feels very much like present day. It's written in 1998, and almost 20 years later, I feel like the future this book depicts is the world we're already living in. Which makes it all the more eerier.
Posted by Fia at 16:13