Daggerspell - #1 of the Deverry Cycle 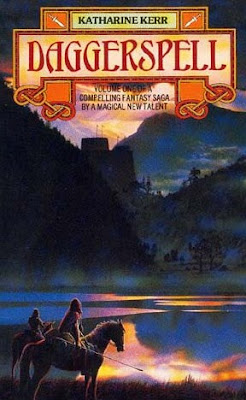 Jill is the daughter of a serving lass and a silver dagger, a man who fights for his keep. When her mother dies, her father Cullyn takes her with him on the road. She grows up learning the tricks of the trade, but she's also gifted with the sight and can see things before they happen, and see the wildfolk, gnomes and fairies, something that frightens her father. One day, she meets Otho, the silversmith, whom gives her a riddle: "If ever you find no one, ask him what craft to take."

Little do she know, the man named no one (Nevyn) is out there, looking for her, and has been for hundreds of years...

Many moons ago, I read this series (almost the whole of it in Swedish), and I completely loved it. When I talked about the series this summer with Hanna, the more we talked, the more we felt like reading it again. And so, we have set up a schedule of one book a month for 15 months. Join us if you want to!

The story, if you're not already aquainted with it, is a sword and sorcerer fantasy inspired by the celtic culture. It tells the tale of prince Galrion, a man touched by magic, and his betrothed Brangwen, her brother Gerraent and their friend Blaen. Three men whom all love the same women, and Brangwen whom herself is destined to become something more than just some mans wife.

It's a tale of love, friendship, betrayal and a debt that has to be repayed, if not in this life then in next. These four characters fates are entwined forever, until they fulfill their destiny.

The first book of the series tells the stories of three lifetimes. Jill's lifetime starts in the year 1045, and the book then gives a flashback to Brangwen's lifetime, 643, and later on Lyssa's lifetime, 696.

I've never been one for sword and sorcerer tales, but a part of what makes this series so great is that is has borrowed the language and settings of a late iron age, early medieval celtic europe. You just fall in love with the environment and the way they talk, and you're pulled into the world immediately.

The magic of Deverry is called dweomer, and it's as simple as it is extraordinary. It's explained beatifully as a sort of sixth sense; The dweomer warning when something's not right, the ability to see beings and other dimensions, the energy that flows between every living thing and the silver threads that connects us. I love it.

Another thing about Deverry is the wyrd. Every man and woman has his or her wyrd, or destiny if you will. It's kind of like the hinduism's reincarnation, which says that the negative and positive kharma in your life dictates what you will become next.

One of my favourite characters of this story is Jill herself. (Perhaps because she reminds me very much of myself.) She's sometimes described as a masculine woman due to the fact that she's tall, walks with long strides, fights and doesn't like dresses and she has her own agency. Still she manages to avoid being a Strong Woman™, the stereotype that say women can only be strong when they've rid themselves of anything feminine. I'd say, Jill's both masculine and feminine. She's cocky, she's awkward, she's curious, scared, happy. She feels lust, she feels all different kinds of emotions. So do most of the men in this story too. I love the fact that Kerr writes the characters this way, showing the range of emotions men and women can have. Sometimes the men just sits down, bawling their eyes out, or shakes of fear. I love the fact that we have these characters that show how gender doesn't have to dictate our behavior and interests.

That being said, I'm afraid the book suffers from a great deal of sexism and violence against women, too. And although there are some great characters, there are also some wincingly badly written characters too, like Brangwen and Lyssa, whom both are completely without agency and mostly are victims of circumstance.

Some spoilerwarning should perhaps be of use here, since I'll talk about the end a bit.

As much as the series is about Jill and the sorcerer Nevyn, I feel that this book is really about Cullyn, Jill's father. In all of his lifetimes, he's been related to, or a man who cannot or should not love, Jill/Brangwen/Lyssa. It's an unclean love and he's a tarnished man. As Gerraent, he's deeply unsettling and discusting, and as Tanyc, he's gone fullblown psycho. As much as I'm repulsed by Gerraent and Tanyc, I cannot feel repulsed by Cullyn even though he loves his own daughter, and sometimes treat her appallingly. His character is deeply flawed, and he makes mistakes, but he learns from them, rights his wrongs and frees himself of his wyrd. As Nevyn thinks in the end; "he'll never see Cullyn as Gerraent again, only as himself".

I feel like the morale of the story is that even though you're destined to do something, it's still your choice. "Can a man change his stars?" asks little William in the movie A Knight's Tale. "Yes, William", his father replies. "If he believe enough, a man can do anything."