Zen Cho - Sorcerer To The Crown 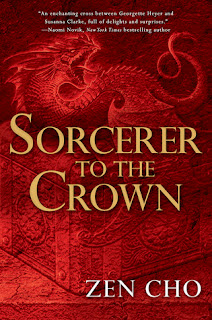 Zacharias Whyte, the Sorcerer Royal of Great Britain, is having a difficult time. Not only is he a freed slave, adopted by the last Sorcerer Royal, and disliked by the very same Society of the Unnatural Philosophers he now leads, but Englands magical stocks are ebbing and everybody blames him for it.

As a way to leave town for a bit, he goes to a school of gentlewitches to give a speech about magic. There he cross paths with Prunella Gentleman, a chockingly pragmatic and forward young lady with a certain talent for casting spells and hexed. She was brought by her father to England from India as a young child. Shortly thereafter, her father died and left her in the care of mrs Dauberney, the owner and headmaster of the school. Prunella one day discovers a family secret, and is at the same time made aware of her caretakers disinterest in her. She decides to make a better life for herself, and turns to Zacharias for help.

This book is a great victorian fantasy-adventure, in the style of Jane Austen, but with dragons and other magical creatures in the style of Naomi Novik. It is a great read, fast paced and witty, full of vivid characters, women with agency, people of different colour. She's lending her voice to the people who were enslaved or colonized by Britain in the 18h century, giving us a side of the story we've never heard before.

She even uses magical abilities as a metaphor for women's issues, when the white men state that "women's bodies are to fragile for magic, that they are too nonsensical to learn thamaturgy", ecchoing the words of that time used in other contexts, when women was told it was unnatural for them to aspire to learn skills and do things on their own.

And then she proves them wrong.

I truly loved this book, and you should all read it!

If my review is not enough to persuade you, here's Anna Bark Perssons review too. Listen to Anna.