Two days before Åcon 8 happened, I fell and broke my ribs (which I don't recommend doing if you're going to a con). But, since I am a very dedicated fan, it wasn't going to stop me from going. It's Åcan, not Åcannot, after all.

The first stretch of the road to Åcon was taking the train to Uppsala.  I was quite immovable, but got a lot of help from strangers on the train. In Uppsala I meet up with Nahal Ghanbari, Anna Bark Persson and later next morning, Maria Nygård. Whenever we four are together, good things happen. We're currently plotting evil schemes planning Kontur while simultaniously running the Swedish tv-series blog Onda Cirkeln with Hanna Svensson and Frida Otterhag (but Frida is AWOL in Japan). We actually kinda signed on to do both of them while in Åland in 2015, so if you're ever in Åland and get an idea -- just go with it, it's probably the best idea in the world!

Thursday morning we took the ferry over to Åland. At the bus we met up with Johan and Linnéa Anglemark, Åka and Ante Davour, Jessica and Tony Elgenstierna, who're mostly all of them in on our Kontur-schemes. We spent the better part of the boat trip to Åland talking about committée-stuff. As one does. 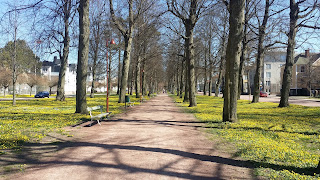 When we got to Åland, the sun was shining, the birds were singing and the sea glistened in the sunlight. It was a good start, and it got even lovelier during the weekend.

The hotel had a nice porch where we sat outside in the sun and drank beer for most of the weekend.
Since Åcon's a semi-relaxacon this means it has a very light program track with a lot of time between items to just hang out, read, explore Åland and drink beer. This suits me very nicely, and worked well with broken ribs. 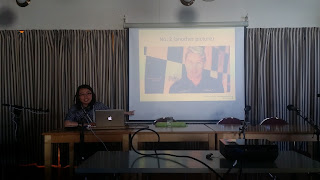 The first program item was the Guest of Honour speech, where Zen Cho talked about the cloud of ignorance and how accepting that you don't know everything can be a good thing. It was a really good speech and set a good tone for the whole con. Meeting Zen Cho was great, I was immediately star-struck when I saw her at Loncon in the panel with Mary Robinette Kowal about regency fantasy, and I'd read and loved Sorcerer to The Crown. She has a lot of spirit and a contagious laughter.

Tommy Persson and Sari Polvinen had a book-duel, next, which consisted of Sari taking the side of character-driven books and Tommy the side of books with a structure. None of these things are exclusive, yet they can of course lead to very different books. Tommy and Sari landed in the diplomatic consensus that "a good book is a good book", which is all the consensus you need, sometimes. 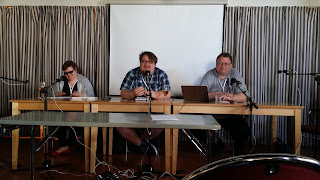 Early Friday morning I attended Crystal's Impostor Syndrome Workshop. I felt like an Impostor for saying I have Impostor Syndrome (which probably means I have it). It was such a great workshop, Kudos to Crystal for making time for this!

Friday early afternoon I participated in "Marvel's female superheroes" with Kisu Leikomaa, Elisa Wiik and Nahal. Some great things were said. I had a lot of fun and was pleased with the result. I had planned to be in one more program item during the weekend (Wibbley Wobbley Timey Wimey) but ended up in a couple of game shows too, which often happens when Jukka Halme is involved.

The first gameshow I participated was later that Friday, when my team fought against Zen Chos team in "Never Mind the Buzzaldrins" which was a game show where we had to guess the movie from the poster. This seemed easy enough. Except the posters where Polish and very, very artsy (read: had absolutely no connection to the movies). I, Rachel Monte and Tobias Bodlund were named team Amoeba, but quickly renamed ourselves Team Bad Ass. The other team consisted of Zen, Shimo and Merja Polvinen (I think). Their team-name escaped my memory, but not their inevitable victory.

The lovely Candy assisted the game-show host Jukka, and he was a real cutie. I sang to his honour by switching the word "Carrie" to "Candy" in Europes song. It sounded horrible. I'm going to have to make it into a filk.

Saturday meant that I was going to host my first ever panel: "Wibbley Wobbley Timey Wimey". I have always felt the urge Not To Moderate a panel. I really don't think I'm suited for being a moderator. It's just not my thing. But... A while back I wrote something on Facebook a long the lines of "Someone should host  time travel panel! I want to talk about time travel!" So, of course Sini Neuvonen contacted me and asked me to host one on Åland. (Be careful what you wish for!)

I thought that - if I'm ever going to host a panel about anything, it should be time-travel, so I accepted. I recruited Åka, Shimo and Tommy, and prepared a bunch of themes;

* Why do we need temporal mechanics?
* Destiny-schmestiny
* The Blast from the Past
* Are you my mommy?

I thought the panel went ok. I'd prepaired for it months ahead, sent out questions to the panelists and was not very stressed about it at all. Afterwards I had a lot of people come up to me and say they liked it. I hope there will be a next time!

There were a "Romance and fantasy"-panel with Zen, Kisu, Tommy and Merja as a moderator. I'm full of admiration of Merja, she's indeed marvellous. Her Brittish accent is very good too!  Tommy quickly stated that he was the token male, and laughter ensued. It was a good panel! I really liked it!

It was followed by "History and writing" with Zen, Shimo, Vesa Sisättö, Petri Hiltunen and Sari Polvinen. It too was a great panel and they even got in a few good points about appropriation too.


The last item of Saturday was the game show "Just a Speculative Fiction Minute" and I was, again, recruited as a contestant. It was improv and that's not really my strong suit so I got out of my comfort zone real quick. It was set up so that I'd get a title and the audience would shout some directives, a theme, a genre and some elements and then I had to review or explain the story as if it was a real book. And in 60 seconds. The first time I got horror and it really, really went bad. I went about it all wrong, trying to tell the horror story instead of getting laughs. I got a few sympathetic laughs, and went with a different approach for the next few ones.

The last one was about a Russian cabaret, Swedish Sharkballs and Vulcanos, and I made up a story about Vulcans in a Russian Cabaret that was hated by the audience (that was Vulcans too), and how they showed their dislike by giving the actors the "Vulcan-Nooooo!" and then sinking them into shark tanks. Thankfully people laughed.

The Saturday party was a blast too. So many good friends together at one place is almost always a guaranteed fun night, but I can't stress how lovely it is to be among this exact crowd. Swedish and Finnish Fandom are the best.

Ben Roimola and his wife (sorry, your name escapes me) came up to me and said that I'd been very funny on the game shows, and I was very thankful to them for saying that, even though I felt it couldn't be true (my impostor syndrome acting up). Then Mikko Seppänen and Elisa had read my blog post about the crazy Legend of Tomorrow-theory, and we had a fun talk about that, one fellow tv-addict to another. Then we started talking about Star Trek, and Petri quoted one of the first movie, and I quoted another, and Mikko quoted another, and so on and so forth until one of the persons listening said that it felt like being on a carusel and then getting thrown off and seeing it spinning out of control.

Talking about the beauty of Star Trek is one of those small moments that adds up to the feeling of how much I belong in fandom. Having a program where people are allowed to discuss regency fantasy and romance fantasy in a serious way, is another. I've been called a fake geek girl for liking romance, but here no one judged me. I have gotten used to not even being given the time of the day when talking about Star Trek, but these people not only listen, they accept that I'm every bit as much of a Trekkie as them. They take me seriously. And I love them for it.


I totally loved the con, I loved the program, I loved the people and the atmosphere. It suited me very well. I loved the game shows, even though I felt a bit awkward at times. (And I would go up there again!)

This is just one of the many reasons I'm working on Worldcon 75. Finnish Fandom has been involved in the three greatest cons I've been too, Loncon, Archipelacon and Åcon. We need more people to meet the Finnish fandom and and experience the Finnish cons.

I'm gonna go to Finncon this weekend. I expect it to be an awesome con, too.
Posted by Fia at 19:46