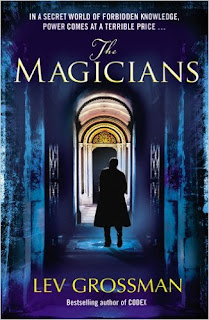 I finished The Magicians by Lev Grossman last night. It took me quite a long while to read it, and I have some mixed feelings about it, but mostly good ones. Especially about the ending, which left me wanting more.

The Magicians is about Quentin Coldwater, who finds himself drafted to Brakehills University, a school for Magicians in learning. Q's been feeling depressed lately. Feeling like he doesn't belong. His friends make fun of him for being sucked up in the Fillory books, which -- to be honest -- are kids books. Fillory is a magical place with fairy creatures (very much like Narnia), a place that draws the three Chatwin siblings in and sends them on adventures. Q wished he could escape to Fillory, instead of being stuck in the real world in upstate New York. Then he stumbles upon Brakehills, finds out that magic is real, and finally starting to feel like he's whole again. But he soon finds out that the magical world is a dangerous and hard one, even more so than the mundane world, and everything can turn to shit within the blink of an eye,

Someone described The Magicians as Harry Potter for grown-ups, and that's just what it is. While Harry Potter has a filter of sparkle and twinkle, a sense of wonder, the Magicians has a filter of car exhaust and dirty back alleys. It's original in that sense, makes it feel real. When the magicians are everyday people, it gives the story-telling an edge, or a bit of kitchen sink-realism if you will.

The narrative is a bit uneven, though. It starts out as an exciting tale of discovery, and slumps into the every day school life, and further on looses a bit of steam before the big reveal. It lost me about half way through before I dedicated myself to finishing it and got drawn in again. For those without patience, bear through -- it's worth it. Some might not notice the slump as much as me, but that's because I'm easily distracted.