The Road to Worldcon 75

For most of you, Worldcon 75 lasted 5 days. For me, it has been my favourite project for over 2 years.

It started in the fan village of Loncon 3, 2014, with the Helsinki party. I helped by serving tar soda and buckthorn & rhubarb drinks, and also hung out with a lot of lovely Finns for the whole convention-week, I knew by then I needed to be a part of Worldcon 75. And so, when they won in 2015 I volunteered. 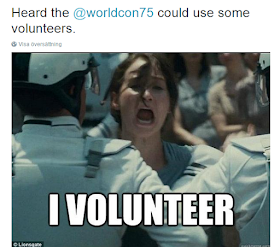 To my own astonishment, this tweet gained a lot of traction, being retweeted by over 100 people during the course of a few days. It was my first taste of Worldcon 75 Social Media awesomeness and resulted in me being assigned to work as a Social Media (SoMe) staffer.

I've since then been working Worldcon 75-Social Media almost all of my waking hours for 2 years, save for a few breaks, work, and other cons. I did expect to work a lot, but in the end I worked a lot more than initially expected, just because it was such a wonderful experience, and unexpectedly rewarding. I love interacting with people online, and working customer service. Another benefit of working Social Media is that it gave me an overview of the all the different corners of the convention and included working closely with all the other divisions, meeting with and chatting with lovely staffers from all over the world. It's the best position I could ever have hoped for.

But I must admit, I feel slightly bad for what I put my Worldcon-bosses through, they had a hard time getting me to log off during my days off. (Sorry Outi, Paul, Colette, Karo and Jukka!)

Of course, we've had our share of rough patches, but what Worldcon doesn't? For me, the fun greatly outweighs any difficulties there have been.

In the winter of 2016, my lovely Area Head Dave Hogg, and my lovely co-worker Nina Niskanen sadly decided to step down, and I was appointed Area Head of Social Media. Me and my right hand woman Lucy Huntzinger have since then mostly been managing things by ourself. It worked really well! In May 2017, we recruited two more staffers: Kat Grimsley and Minna "Loviathar" Hiltula, to help prior to and during the convention. I had a lot of fun working with and getting to know these people, and together we managed to respond to things online all day, 24 hours. There was some really amazing SoMe teamwork going on there and I am super proud of us.

Aside from the monitoring of SoMe, I've attended three staff weekends, May 2016, November 2016 and May 2017. I highly recommend going to staff-meet ups before the convention, as you get to know some of the people you'll be working closely with, get time to wander around the venue and get your bearings. Also, planning is way more efficient when you're all gathered in one room talking things through.

If I could do it again, I would. I have made hundreds of new friends through out the years, and absolutely love Finnish fandom.
Fia at 13:08